Is It Wrong to Pick up Girls in a Dungeon? Probably not, if there’s soon to be 4 seasons

Is It Wrong to Pick Up Girls in a Dungeon? was among the most popular fantasy animes released after its launch on April 4, 2015. After the finale of Season 3, Argonaut (Hero's Return), concluded with a sorrowful ending, fans were left heartbroken but at the same time excited to see what happens next for Bell and Ryu.

The fourth season aired on July 22, 2022. When the production company, J.C Staff, finally unveiled the official promotional video and fundamental graphics for Season 4, the video provide hints as to what the plot of season 4 will be all about.

What Transpired In The 3rd Season Finale of 'DanMachi'?

Season 3's final episode has been heartbreaking for Bell. Hermes devised a strategy to reclaim his honor, but it involved pitting Gros and other Xenos monsters over Bell. Fortunately, when the fully resurrected Asterius emerged, the adventurer encountered a genuine foe, enabling Bell to partake in a realistic rematch.

However, Bell is defeated by Asterius during their fight, prompting him to understand that he still has a long way to go, and he must train once more to become stronger. Despite their earlier conflict, Ais talked with Bell and decided to teach him but gave no exact time frame.

The fourth season of Is It Wrong to Try to Pick Up Girls in a Dungeon will start picking up where the third season concluded. Wiene, the Vouivre who spread destruction throughout Orario, was one of the centerpieces of the 3rd season of the fantasy adventure series that covered volumes 9-11 of the light novel. If the show follows up on past episodes, Season 4 will cover volumes 12-14.

In the premiere of season 4, we will see Bell and the remaining adventurers exploring the Great Fall, which marks the beginning of the dungeon's Lower Levels. Season 4 will feature significantly more time spent in the dungeons than Season 3, as well as new challenges and surprises in the Water City.

Without giving too much spoiler, the plotline will almost definitely revolve around Ryuu Lion, who finds himself battling alongside Bell after separating from the rest of the group. Numerous fans feel that the future volumes will be among the most depressing and darkest in the series, so it will be intriguing to see how this is depicted. What's more, we may be in for another exciting season if everything goes well. 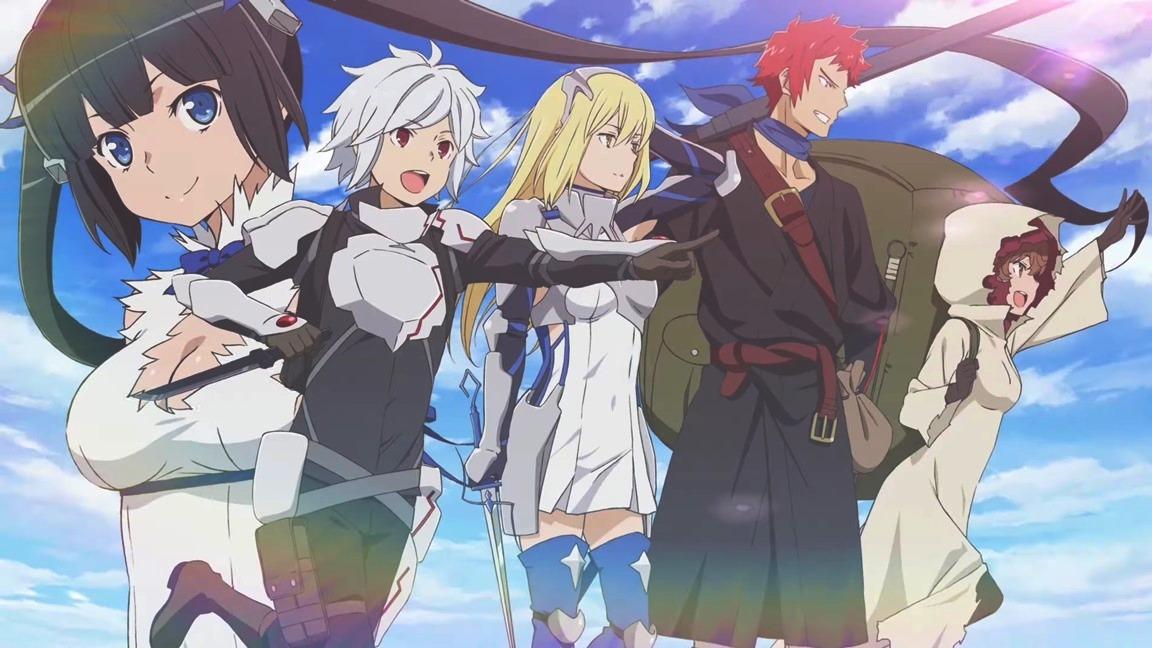 Yoshiki Yamakawa supervised the first season of Danmachi, while Hideki Tachibana took over for the second season. According to sources, Hideki will undoubtedly direct the fourth season as well. Furthermore, Ryuutaro Kawakami of J.C Staff studio developed the DanMachi animated TV series, while Keiji Inai was in charge of the show's music.

Several characters and staff members are also expected to return for the fourth season. As previously stated, J.C staff studio will be handling the anime's production while Hideki Tachibana will also be renewing his position as the director, all according to plan.

With the announcement of the anime trailer, it was also revealed that the opening song for Is It Wrong To Try To Pick Up Girls In A Dungeon Season 4 will be "Tentou" by sajou no hana, who also performed the ending song for season 3. The iconic Saori Hayami, who is currently portraying Yor Forger from Spy x Family, will sing the concluding theme titled "Guide."

DanMachi Season 4: Where to Watch

Although without confirmation, DanMachi Season 4 will air in Japan on Tokyo MX, and it is assumed that the show will be broadcast overseas on HIDIVE rather than Crunchyroll. Despite the fact that it has been operating for quite some time, HIDIVE has recently introduced notable series, such as the Spring hit Ya Boy Kongming. Sentai Filmworks, a prominent distributor with licensing for several popular animation series, owns the site.

HIDIVE now has unique access to nearly all Sentai Filmworks anime. DanMachi's first three seasons were pulled from Crunchyroll earlier this year, leaving just Sentai's platform to watch the series. Although it has not been established whether Sentai owns the license to DanMachi Season 4, it is overwhelmingly probable. If it is the case, the latest season will most eventually be available on HIDIVE exclusively.

HIDIVE, like Crunchyroll, also creates SimulDubs for English dub enthusiasts. This is expected to be announced about a month after the show airs. The number of episodes in the upcoming series is still unknown. Nevertheless, it will be another single-season show with 12 or 13 episodes, similar to prior seasons.

Which Studio Will Be Producing DanMachi Season 4?

As previously mentioned, J.C. Staff is once again producing DanMachi Season 4 with the assistance of EGG FIRM and SB Creative. Season 4 of Is It Wrong to Try to Pick Up Girls in a Dungeon retains a massive proportion of the team from the third season. After stepping over as director in the second season, Hideki Tachibana has focused virtually solely on the franchise.

The screenplay is perhaps the most valuable information about the production of Season 4. Since the first season, Hideki Shirane has been in charge of the show's composition. On the other side, the original author, Fujino Omori, is working as a script supervisor and currently supporting him.

It is unclear as to what reason why Fujino Omori is only just now officially joining the production crew, rather than in past seasons. Fans can only believe that all this indicates the priority exerted on ensuring that the following season is properly adapted.

Is it Worth Watching  DanMachi? 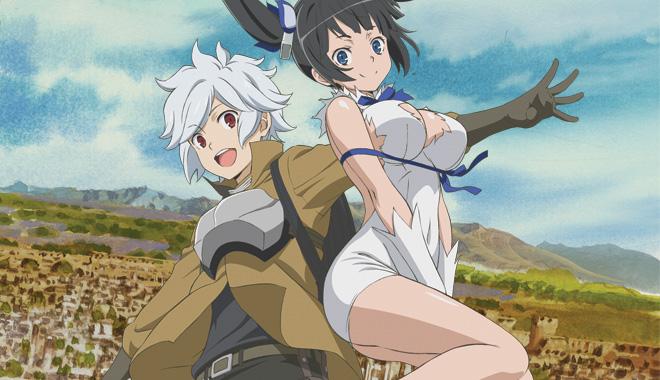 DanMachi is a show in which the action and tension come in waves. The series is never dull. J.C. Staff delivered excellent animation with well-polished graphics and decent yet engaging execution. Because of the well-produced soundtrack, the different combats have plenty of passion and intensity. The confrontations and battles are the show's powerful element. DanMachi is a must-see for anyone who likes a terrific action-packed animation with an intriguing background.

DanMachi is an action, romance, humor, and adventure series that is growing by great strides. It offers an easy-to-follow tale that doesn't demand too much concentration. The series combines excellent fight scenes and stunning graphics. With that, watch the first three seasons of Is It Wrong to Pick Up Girls in a Dungeon? on all available streaming platforms so you can be up to date before the new season starts.

See also: Top 5 Animes That Will Always Be Binge Worthy

See also: Top 10 Anime Characters That Were Ruined By Their Sequels

Top 5 Animes That Will Always Be Binge WorthyNov 3, 9pm

Over the past few years up to this point, millions of viewers hastily looked for new ways to entertain themselves.

Top 10 Anime Characters That Were Ruined By Their SequelsApr 21, 4pm

Just a few of the truly fantastic characters in anime history include Kamado Tanjiro, Edward Elric, and Monkey D. Luffy. As these characters and their stories develop and alter throughout their respective shows, viewers become fascinated with them.

In a predominantly male-dominated culture and genre, anime tends to over-represent and favor action-packed adventures of male protagonists discovering their true strengths. As a result, excellent anime featuring female characters can be challenging to locate.

Anime characters are fantastic, aren’t they. They provide us endless hours of entertainment, exceptionally cool visuals, and somehow manage to make us connect with them on an emotional level. With anime characters, you either absolutely adore them or detest them with every neuron in your body.

According to Fans, These 5 Anime have the Most Annoying FanbasesOct 23, 1pm

With thousands of critics emerging, seemingly everyday, it is somehow difficult to be a fan of anime films or series nowadays. One of the most challenging parts is the toxic fandoms, you most commonly encounter online, ready to start an argument at the drop of a hat.

In the world of anime and just about any other story, it's common to have a protagonist and an antagonist. As the viewer, we're to follow the protagonist throughout their journey in hopes of a well-deserved victory.

Back in August 2021, Funimation owner Sony finalized its acquisition of rival anime streaming platform Crunchyroll for over $1.2 billion, and now the media and tech giant has formally confirmed the merger of the two services.

5 of the Best (or the Worst) Anime Characters with Split PersonalitiesOct 19, 1pm

Anime doesn't usually portray characters with split personalities. However, if they create one, it will be one of the most stunning characters. Split personality is also called Dissociative Identity Disorder (DID).

2 New Live-Action Films in the Future of Fullmetal AlchemistApr 9, 1pm

DigiDestined around the world can now rest easy as Digimon Survive, the upcoming visual novel from Bandai Namco Entertainment has found its release date. After two years of development and release delays due to the pandemic, it is finally seeing the light of day on July 29.

After keeping fans waiting since its original 2021 release schedule, action RPG Bleach: Brave Souls has finally dropped for PlayStation 4. The faithful adaptation of the iconic manga and anime series from author Tite Kubo has finally reached the gaming console, supporting controllers and cross-play with other platforms.

English Dub for The Yakuza’s Guide to BabysittingNov 23, 5pm

The waiting is now finally over. The Yakuza's Guide to Babysitting now launched its long-awaited English dub on October 20, 2022. It will be available only on Crunchyroll. For those who are unfamiliar with the anime, the Yakuza's Guide to Babysitting basically follows the story of Yakuza, an enforcer who is tasked with watching his boss' daughter.

With the latest news surrounding Love, Death, and Robots Vol.3, fans are excited for another wonderful season. Vol.3 will have big shoes to fill, though, as fans were left fiery hot from the first season while being lukewarm for the second.

More Than a Married Couple, But Not Lovers Anime Adaptation will Premiere in October This YearSep 20, 12pm

More Than a Married Couple, But Not Lovers is a popular Japanese manga series. A lot of fans from different parts of the world have been waiting for its release. This is created by Yūki Kanamaru who is best known for being an author &amp; artist.

With the recent news that The Hunter x Hunter manga is coming back, Jujutsu Kaisen 0 is dominating the box office, and many beloved mangas getting their anime adaptations, it’s absolutely an amazing time to be an anime fan.

Anime Adaptation for Murai in Love has been AnnouncedJul 9, 5pm

Rom-com anime fans rejoice. Junta Shima’s romantic comedy manga Murai in Love (Murai no Koi) will be getting an anime adaptation, according to its official Twitter page. In a tweet posted this past June 15, the social media page for the manga series posted a photo featuring an animated onigiri and the message “Murai &amp; Friends will return in The animation.

Twitter Exploded in Celebration for the 16th Anniversary of Fairy TailSep 6, 1pm

Hundreds of Fairy Tail manga fans recalled some of the most unforgettable moments in both manga and anime on its 16th anniversary. The manga was released on August 2, 2006, and since then, it became popular with anime lovers worldwide.

Ni No Kuni, The Anime, The Game and How They’re RelatedJul 25, 9am

Nothing is more exciting than your favorite film generated into an online game. If the digital world offered you the opportunity to play the character that you just once saw on screen, would you still hesitate.

Two New Animated Specials for My Hero AcademiaAug 14, 9am

The wait for a new “My Hero Academia” content is over as the series has received a two-episode special this past June 16-19.
More Stories