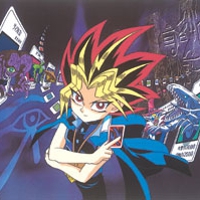 This is the series BEFORE the more well known international version “Yugioh! Duel Monster”. It was only released in Japan.

From Wiki:
“Yu-Gi-Oh! (”Yūgiō", meaning “King of Games”) is the title of the first anime series based on the Yu-Gi-Oh! manga. It aired on TV Asahi.1

The series is loosely connected to the Yu-Gi-Oh! Duel Monsters series (known internationally as simply Yu-Gi-Oh!), which was made by Nihon Ad Systems and aired on TV Tokyo; both anime series are based on the same manga series. Whilst the NAS version bases its story from Volume 8 of the manga onwards, focusing on the Duel Monsters trading card game, the Toei anime is adapted from the early volumes, telling the origins of Yugi’s Millennium Puzzle and the Shadow Games that he plays.

The 1st series, which aired on TV Asahi from April 4, 1998 to October 10, 1998 for a 27-episode run, was produced by Toei Animation. Manga plots were re-written so that they could take up an entire episode time. Also, the level of violence was reduced between the manga and the anime. Finally, a minor character in the manga, Miho Nosaka, became a main character in the first series along with Yugi Mutou, Katsuya Jonouchi, Anzu Mazaki, and Hiroto Honda. Characterization was slightly modified. For instance, Miho is a “ditz” in the anime while in the manga she is a shy student librarian.

New characters and plots, such as those relating to the four game masters, were added, and there are more occurrences of Seto Kaiba and Duel Monsters (Magic and Wizards in the original Japanese manga) than in the corresponding manga, and in some cases, plot points and elements were taken from volume 8 onwards of the manga, for instance field advantages as seen in Duelist Kingdom and Jonouchi’s sister Shizuka, who was introduced later in the manga. Unlike the second series, the card game (Duel Monsters) is not the sole focus of the show. The last episodes of the series focus on the battle between Yugi and Dark Bakura. This series had different voice actors and different character designs than the second series (e.g. Seto Kaiba’s hair is green in Toei’s anime). The series has not been licensed for an English language release."